Why do people get the overwhelming urge to move in the summer? It’s one of those eternal questions, right up there with “Can love really last a lifetime?” and “Why does the Trader Joe’s line I’m in always move the slowest?” Maybe the warm weather wanderlust happens because your kids are off from school, or you graduated from college, or perhaps you just got married. Or maybe it’s just because it’s warm.

For whatever reason, summer is the prime time of year when Americans pull up roots—and find new places to plant them again.

And this moving season is shaping up as one of the busiest in memory. As the economy continues to improve, job markets are opening wide, the sun is shining on folks’ financial prospects, and people are on the move.
Census Bureau migration data collected from 2009 to 2013 that tracked people’s moves in and out of metropolitan areasBut where are they going, exactly? What are the hot spots drawing planes, trains, and automobiles full of new residents? And likewise, where are they leaving in droves? For insight into people’s past, present, and future moves, we looked to three data sets:

Take a look at the most common long-distance (farther than 100 miles) migration paths among the 50 largest metropolitan areas based on the volume of people getting a move on: It‘s hard not to notice the exodus from New York. The New York metro area has the most escapees—but then again, it’s the country’s biggest city. So we adjusted for city size and based our calculation on the ratio of inbound to outbound moves to come up with the most desirable cities—where more people are moving in than moving out.

So here are the cities that people are flocking to: 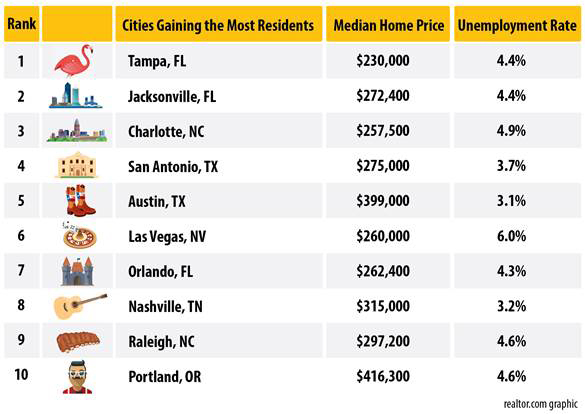 What do these metros have in common? Affordable housing and strong job markets, mostly. Some of these places are just beginning to join the ranks of the housing market’s elite class.

For example, we first noticed dark horse Raleigh, NC, back in March when it popped up on our monthly hottest markets report, and then kept its spot in April. It turns out that Raleigh has one of the best job markets in both hiring opportunities and job satisfaction rate, according to Glassdoor.com.

Florida is clearly the top state for new moves, and not just for the blue-haired set. Three central Florida cities make the cut, largely due to unusually strong job creation. Another factor: housing prices haven’t fully recovered from the crash yet, so there are plenty of deals to be had. Plus, the state has no income tax.

Not all is rainbows and unicorns, however. A decline in foreign buyers is causing inventory to balloon in southern Florida. But, of course, this has a positive side, too, because it means “there’s actually inventory to buy and prices are not rising rapidly as a result of growth in inventory,” says Jonathan Smoke, our chief economist.

And then there’s the Lone Star State. The San Antonio metro area, home to the Alamo and the NBA’s Spurs, was one of the fastest-growing major U.S. metros in 2015, with 2.2 percent population growth, according to the Census Bureau. About 80 miles away, Austin—the city competing with San Antonio for the hallowed title of “Birthplace of the Breakfast Taco”—is officially home to 2 million people, according to Census data. That’s about eight times its population a half-century ago when IBM opened a facility that set the stage for the tech boom.

Austin now counts Apple, Google, Facebook, Intel, and Samsung among its top employers. But those who want to keep Austin weird have no need to despair: Hipsters, indie music, turtle racing, and a famous tower of junk still co-exist in harmony.

Then there are the big losers—and they are big. America’s largest cities are losing armies of residents, and there just aren’t enough people moving in to compensate. Take a look: 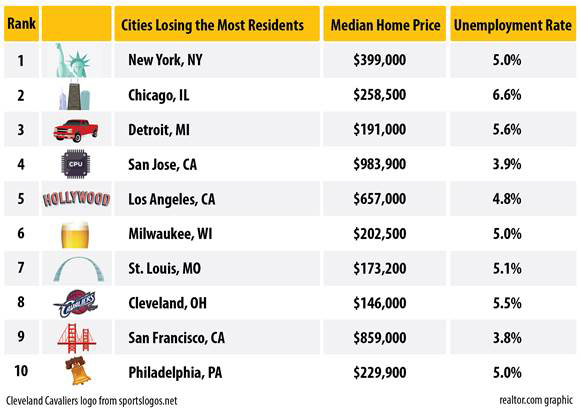 Leaving New York, rather than moving to it, has established itself as a solid trend—getting away from the harsh winters, harsher summers, high taxes, exorbitant cost of living, and bad-tempered hot dog vendors. (And also the excitement, the glamour, the beautiful people, and the city that never, ever sleeps.) On the West Coast, where a San Francisco shack is going for $1.38 million, soaring home prices are pushing locals out and scaring away potential new ones.

Where are they going? As you can see in the map above, New Yorkers are mostly moving to Florida. San Franciscans opt for cheaper cities away from the coast (but not outside California), and Angelenos head to Las Vegas. And everyone is moving to Texas! Must be the breakfast tacos.

Of course, what you need in a hometown varies at different stages of your life. A bedroom community in Arizona may represent perfection for baby boomers, but soul-crushing boredom for millennials. To find out where the up-and-coming generation is setting its sights, we sliced and diced our own cross-metro search data—people searching realtor.com for homes outside the area where they live—by age group. 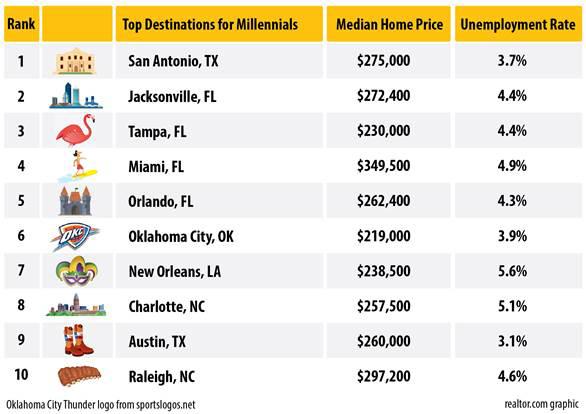 Worth calling out: Oklahoma City. More and more young, educated 25- to 34-year-olds choosing between the opportunities and excitement of city life and the affordability and warmth of a small town seem to be finding this growing city in the Great Plains to be the perfect compromise. WalletHub declared it the seventh best city to start a career, taking into account factors such as availability of entry-level jobs, median starting salary, economic mobility, and workforce diversity. Oh, and there’s the Thunder, too.